Self Catering Holiday Cottages on Exmoor

It is situated in the northern part of Devon and West Somerset and covers 267 square miles, extending from the Brendon Hills in the east to Combe Martin in the west.

Whether you are an experienced walker or someone who prefers a short stroll, Exmoor National Park is the ideal place to explore the outdoors on foot. With over 1000km of footpaths and bridleways, through woodlands, past tumbling rivers and on open heather-covered moorland, the variety is vast.

There are a number of guided walks available in the National Park, where experts can help you explore the fascinating history and wildlife of Exmoor. There are walks to suit everyone, including some that wheelchair users and families with small children may find suitable.

Here at Smythen Farm Holiday Cottages, our favourite places in Exmoor National Park are the Tarr Steps and the Valley of the Rocks, as we believe that they offer the very best in contrasts that the Park has to offer. 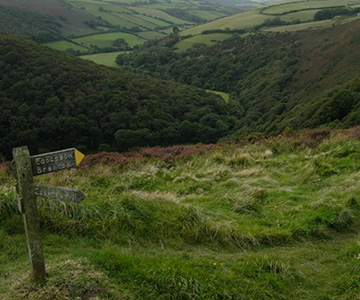 The gateway to 'Doone Country', Brendon is a lovely whitewashed and thatched village surrounded by trees. 'Doone Valley' can be found nearby - named as such after the countryside in which R.D. Blackmore set his novel Lorna Doone. You can also visit Badgeworthy Water, where there is a memorial to the famous author. 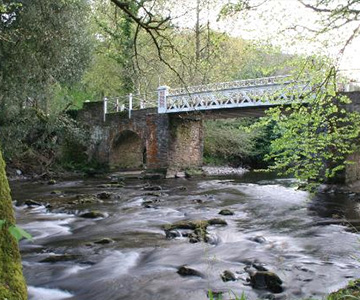 Situated amongst some of Exmoor's most beautiful scenery, Dulverton is a small market town, with a 13th century church tower, a market square and the river Barle flowing through it. 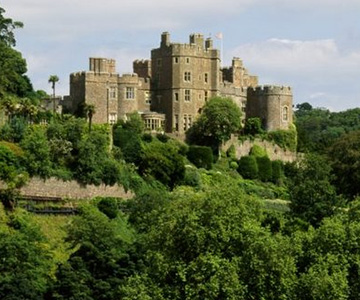 A quaint, small town with many 'olde world' houses, Dunster is dominated by a 19th century red sandstone castle that has existed for over a thousand years. Originally a Norman castle, most of the original structure was replaced in the 19th century with the exception of the 13th century gatehouse. The castle and park were given over to the National Trust in 1976 by Lieutenant Colonel Walter Luttrell, whose ancestors had been at Dunster for 600 years.

Dunster was a port during the 16th century, but the sea has since receded about two miles. Dunster has a wide main street, a 17th century yarn market and many tea shops to allow for the crowds that arrive each summer. 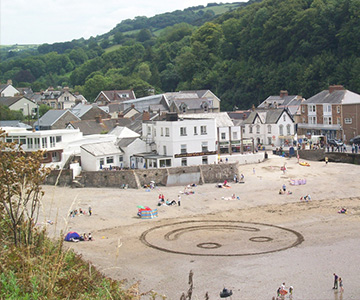 Exford is a town that lies along the River Exe. North of the village is Exford Common, which leads onto Dunkery Beacon - about a five mile trek. Dunkery Beacon, owned by the National Trust, is the highest point on Exmoor, with outstanding views over (it is said) 17 counties. 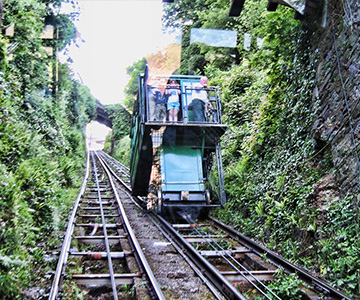 Once a medieval port, Minehead is now a large traditional seaside resort with a wide sweeping bay that offers good bathing. 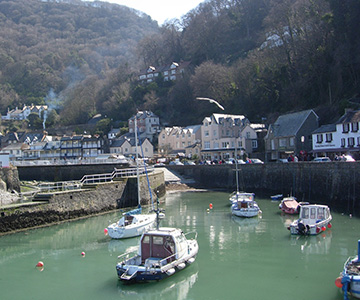 Sitting on top of a 500 dome shaped cliff, overlooking Lynmouth. This mainly Victorian town enjoys spectacular views out to sea. 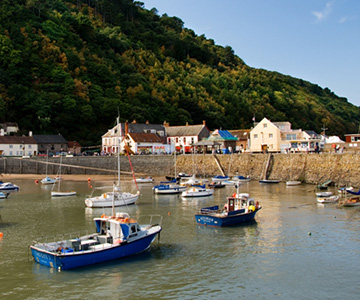 Once a medieval port, Minehead is now a large traditional seaside resort. There is a wide sweeping bay that offers good bathing. 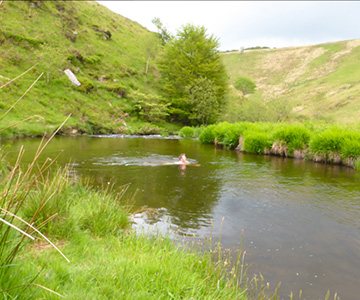 A pretty little village on the River Barle, in the middle of Exmoor National Park. 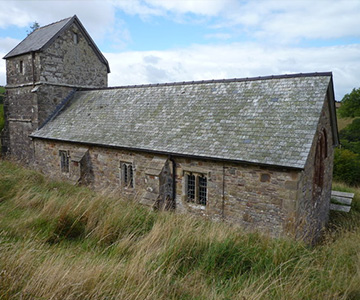 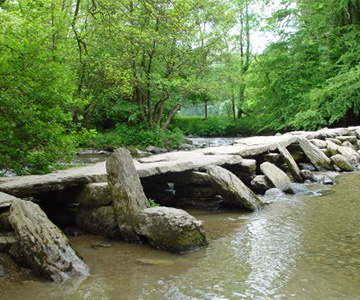 A lovely little village on the River Exe with a thatched pub and seven bridges, Winsford also includes a pack horse bridge. The Tarr Steps are only 3 miles away, a particularly fine clapper bridge consisting of 15 spans of stepping stones, each weighing around 2 tonnes, not of local origin.

“Thanks for a lovely cottages very cosy. Easy to find way to places. Lovely and warm cosy bed. Thanks for a nice quiet place to stay and great to have access to the donkey field and woods down the lane for easy walks. Pool great and very warm. Woolacombe and Saunton Sands great for open space.
Great location to Explore North Devon.Thanks again
Tescos not far away.
Sawmills very good for food.
Thanks again

“
We had a brilliant week here at Smythen Farm, with beautiful views. The children enjoyed the swimming pool which was lovely and warm. The play area was a great hit as was the visit from Bill and family to drop off Easter Eggs. We were made to feel very welcome by Bill and Catherine and nothing was too much trouble.
Watermouth Castke was a good day out and you can return for £2.50 each. Combe Martin Wildlife and Dinosaur Park was a good day out. My favourite da

“Had a fantastic stay in Seaview cottage, Catherine and Bill were both lovely and extremely helpful. The games room and the pool were used a lot by both families as the weather wasn’t too good. We all loved the donkeys and the ponies too.
The beaches at Woolacombe were beautiful and the girls went on a beach hack from Mullacott riding stables which was fantastic. The staff were really helpful and friendly and the horses were all very well behaved and suitable for

“This our 3rd – we have bought each of our children and grandchildren since 2010. Each time we have had a wonderful time, the kids love the freedom and we love the views and the quiet.
Keep up the good work Bill and Kathryn , I am sure we will be back – ypu have a great place here, the new pool and games room are great.
Thank you for a lovely week 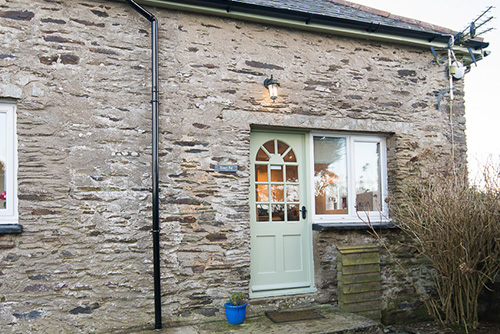 Honey Pot is a beautiful, compact cottage ideal for couples. Honey Pot is dog-friendly and fully equipped for a comfortable break in North Devon. 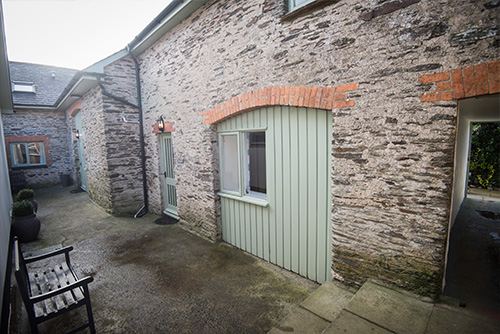 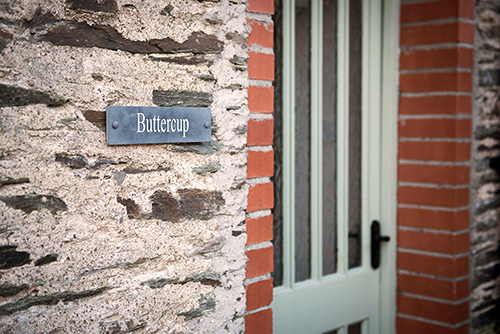 Buttercup Cottage is an ideal cottage for families, especially those with fury members as its dog-friendly. Located in the courtyard, Buttercup cottage can sleep 4 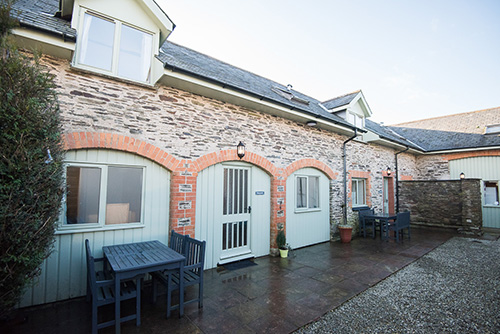 Located in the courtyard, Honeysuckle Cottage is dog-friendly and ideal for families of up to 4. 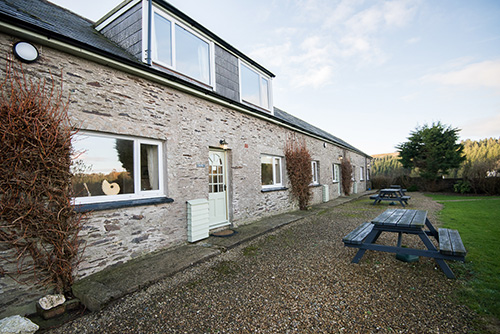 Sea View cottage is a superb, dog-friendly holiday cottage with stunning view across the North Devon coast. Ideal for families of 5, Sea View has been fully refurbished to a high standard. The bedrooms have the amazing view across the Sterridge valley and the Bristol Channel to Wales 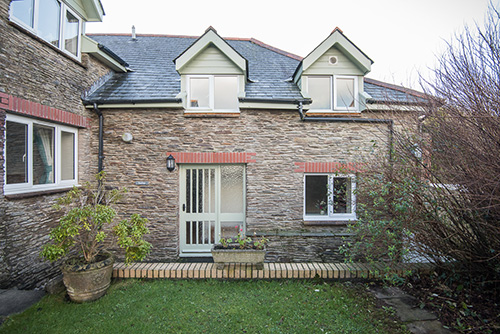 Sunalways Cottage is a spacious, family-friendly cottage sleeping 5 with beautiful views of the Sterridge valley. The vaulted ceilings give a large bright spacious living area 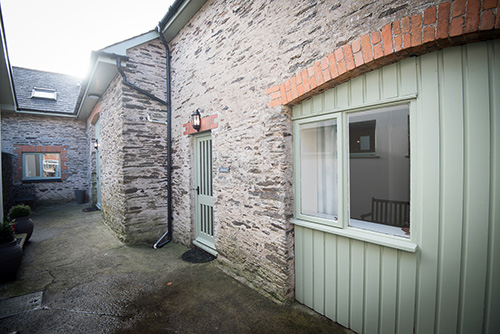 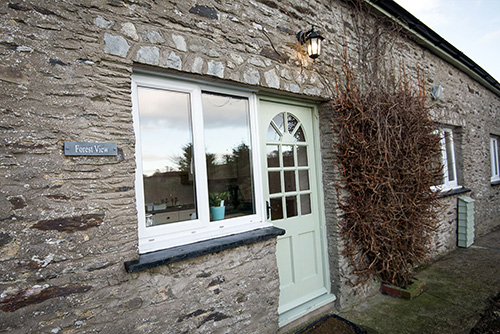 Forest View Cottage is a large, spacious cottage ideal for large families. This cottage is dog-friendly and can sleep up to 6 guests. 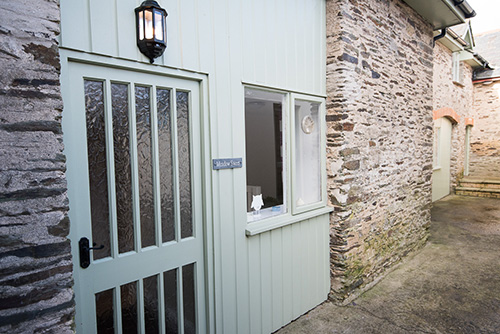 Meadow Sweet is dog friendly and the largest cottage at Smythen Farm. Book this cottage early as its well sort-after for large families or 2 families sharing. Meadow Sweet boasts stunning views across the Sterridge Valley. 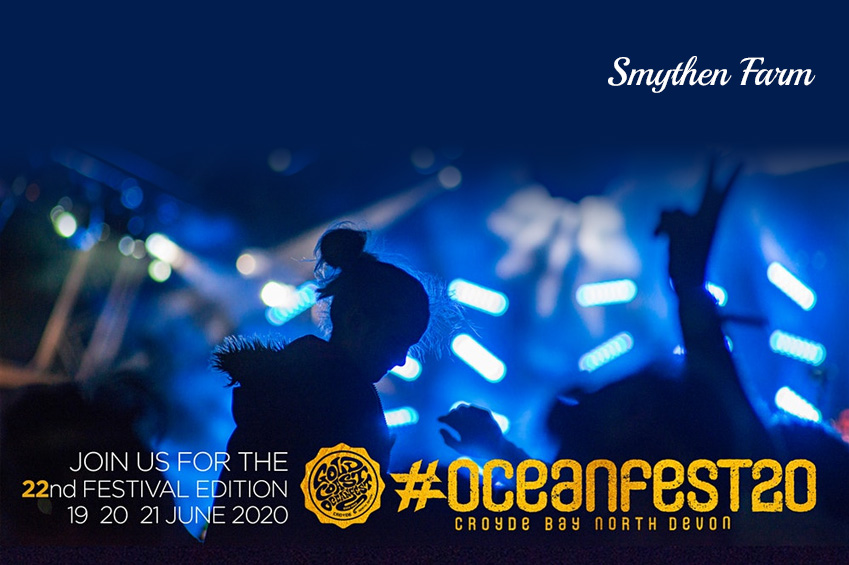 The line-up has been announced for Oceanfest 2020, the headline act are the Kaiser Chiefs being supported by Rudimental, Sub Focas, Reef and the B...

If you are a keen cyclist or cycling family why not use Smythen Farm for your holiday base.  Locally to Smythen Farm we one of the best Cycle p... 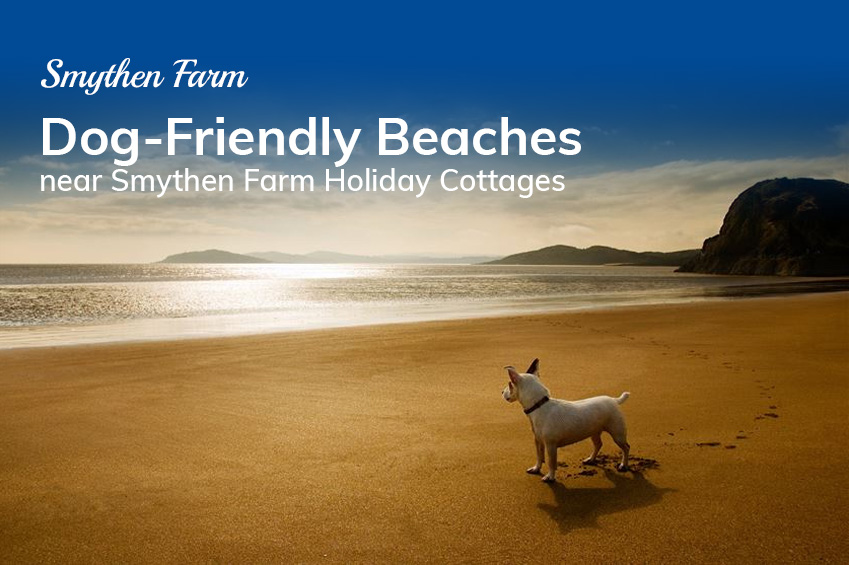 Smythen Farm makes the perfect holiday location for families with dogs, with acres of land and cosy cottages. Surrounding us are a number of excellent... 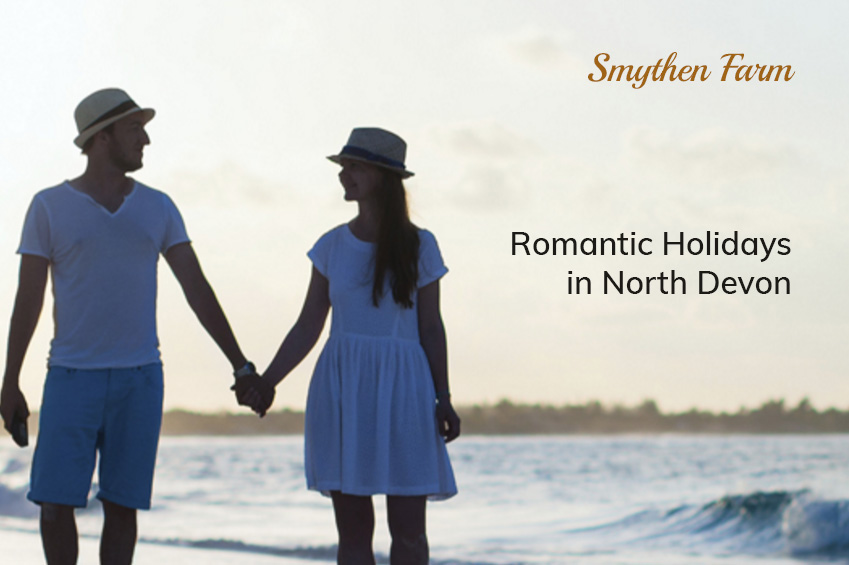 Our smallest holiday cottage, Honey Pot Cottage is the perfect holiday home for couples looking to get away in North Devon with its modern, cosy desig...

Learn to Surf on Holiday in North Devon 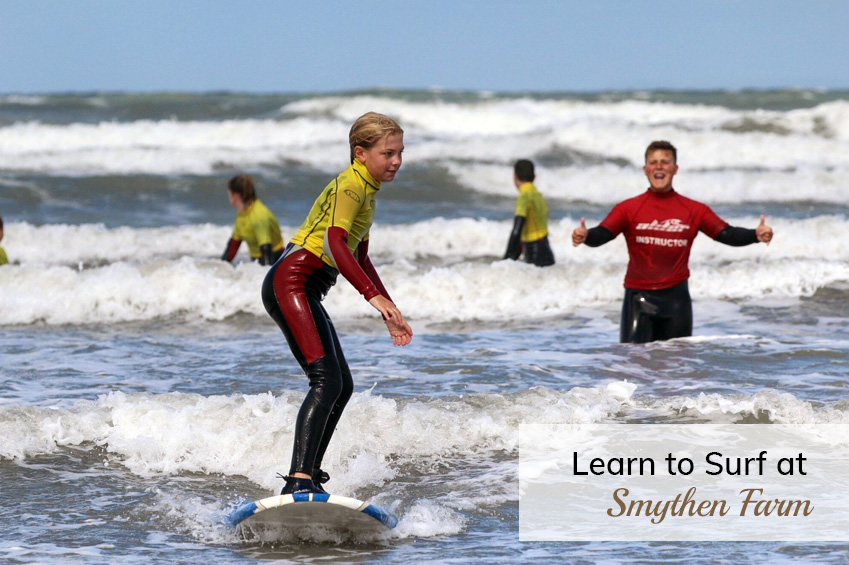 There's plenty to do for families on holiday at Smythen Farm North Devon holiday cottages. We can personally recommend some excellent walks, bike ride...